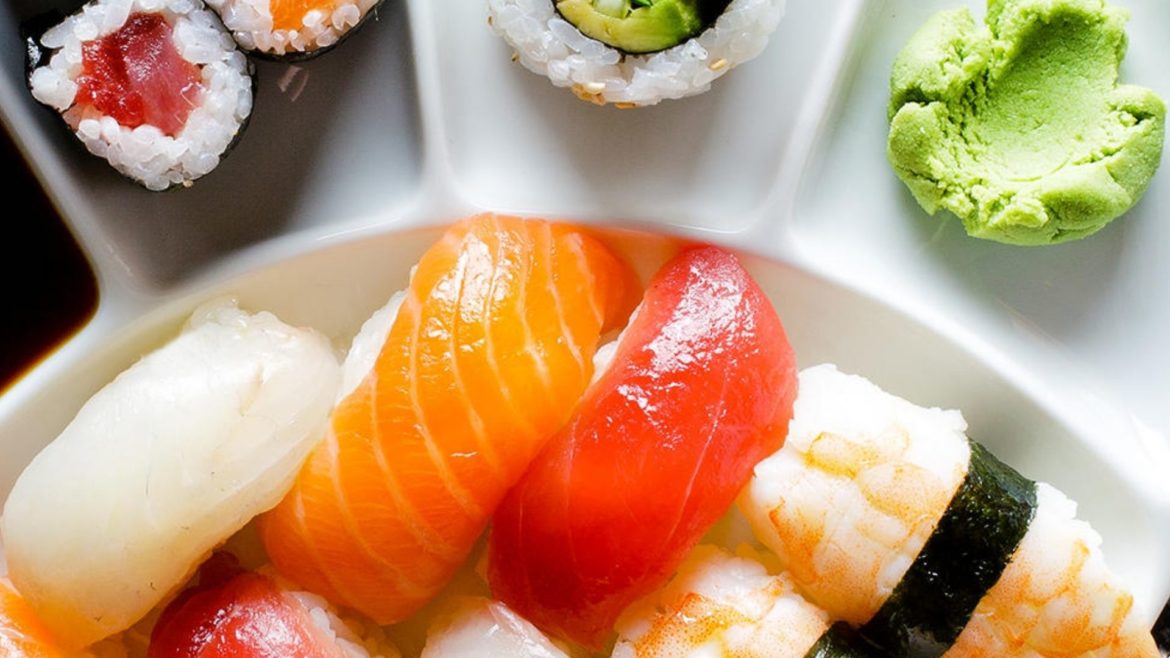 Japanese food is famous around the world.

Before you head to the Japan, check out this listicle of Japanese foods you must try!

Sushi is cold, vinegared rice that is shaped into pieces and typically topped with raw or cooked fish.

Here are the local Japanese rules of eating sushi:

Breakfast in Japan is called “asa gohan” or “morning rice”. Choushoku is the formal word for breakfast.

Traditionally, Japanese breakfast consists of steamed rice, miso soup, a protein such as grilled fish, and side dishes.

Miso soup (misoshiru) is a traditional Japanese soup consisting of a dashi stock into which softened miso paste is mixed.

Miso is a traditional Japanese seasoning produced by fermenting soybeans with salt and kōji and sometimes rice, barley, seaweed, or other ingredients.

It is thicker in texture and tastes sweeter but less spicy than Indian curry.

The meat of choice is more often pork or beef, differing from Indian curry in which chicken or mutton is usually used.

In Japan, “curry rice” is most often referred to simply as “curry” (カレー, karē).

Before eating, Japanese people say “itadakimasu,” a polite phrase meaning “I receive this food.” This expresses thanks to whoever worked to prepare the food in the meal.

Robatayaki (“fireside-cooking”), often shortened to robata, is similar to a barbeque. Foods are cooked over hot charcoal, and served with long, wooden spatulas.

Traditionally, the food consists of grilled seafood and vegetables, but other grilled food may also be served.

The robata cooking style uses a wide, flat open fireplace in the style of an irori (sunken hearth), rather than a shichirin (small portable grill).

Mochi is a popular Japanese rice cake made of a short-grain japonica glutinous rice, and sometimes other ingredients such as water, sugar, and cornstarch.

The rice is pounded into paste and molded into the desired shape.

Mochi’s thick, sticky texture is a chocking hazard, especially among the elderly and young children. Experts advise moistening your throat before eating, cutting the mochi into small pieces, chewing thoroughly, and swallowing carefully.

Shabu-shabu is derived from the “swish swish” sound made when preparing the dish.

Sashimi is thinly sliced, raw food. Unlike sushi, it doesn’t include vinegared rice.

Sashimi is typically seafood, but other meats can be used.

Typically, sashimi is some type of salmon or tuna.

Raw eel is poisonous, so unagi is always cooked.

Japan is a maritime nation surrounded by the ocean. And fish was Japan’s primary source of animal protein until about 100 years ago.

Other popular Japanese seafood choices include:

Udon noodles are a staple of Japanese cuisine.

Udon are thick, chewy Japanese noodles made of wheat flour. There are several varieties of udon noodles in Japan ranging in thickness, shape, and texture.

Udon noodles are usually served chilled in the summer and hot in the winter.

Soba noodles are made of buckwheat flour, roughly as thick as spaghetti, and prepared in various hot and cold dishes.

Tonkotsu Ramen consists of Chinese-style wheat noodles served in a pork broth, and uses toppings such as sliced pork (chāshū), and scallions.

Ramen is one of the best-known and most popular Japanese foods around the world.

There are four major types of Japanese ramen, decided by the base flavor (tare):

Tonkotsu is a Japanese broth made from simmered pork marrow or pork bone. The broth is prepared by boiling the bones for about 8 to 12 hours or more.

Nearly every region in Japan has its own variation of ramen.

Ichiran ramen is the most popular tonkotsu ramen chain in Japan. The chain restaurant began in Fukuoka in 1960 as a ramen stall.

Yatai are small food stalls that can be found along Japanese streets and at festivals, and are a great way to start your foodie adventure in Japan.

These vendors offer on-the-go dishes that are cheap and tasty including:

Konbini (Japanese convenience stores) are one-stop shops on every street corner in Japan.

24/7 konbinis serve as a place to grab a late-night bite.

And the ATMs almost always take foreign cards, unlike in Japanese banks.

It has a slightly bitter taste and a vibrant green color that results from the leaves’ high chlorophyll levels.

With its origins dating back to the Meiji period (1868-1912), yoshoku was encouraged to incorporate Western ingredients into the diets of Japanese people.

A quintessential Japanese snack — the onigiri rice ball is the best, on-the-go food in Japan.

Its a Japanese rice ball made of rice formed into triangular or cylindrical shapes and often wrapped in nori (seaweed sheets).

The most popular onigiri to try in Japan are:

Sake, also referred to as Japanese rice wine, is a popular alcoholic drink made by fermenting rice.

There are 4 basic words to describe the taste of sake; rich (Hojun) and clean (Tanrei) for flavor.

Natto is fermented soybeans. The beans are brought to fermentation by a bacteria called Bacillus subtilis and then aged for about a week.

Natto has a mild fermented flavor with a slightly bitter, earthy undertone that some describe as similar to aged cheese.

Natto is famous for its pungent acrid smell that is similar to old socks or smelly cheese.

The main difference between sushi rice and white rice is the texture. Sushi rice is much stickier than white rice, making it ideal for sushi.

Sushi rice is flavored with vinegar-based seasonings and it’s only used for making sushi.

Ordinary rice, or uruchimai, is the staple of the Japanese diet and consists of short translucent grains.

Kinmemai rice set a Guinness World Record in 2016 for the world’s most expensive rice with its $109 per kilogram.

Gyudon is a popular domburi (rice bowl) dish consisting of beef and onion served over a bowl of rice.

The meat and onion are cooked in a mixture of soy sauce, mirin, sugar and sake giving the dish a sweet, salty flavor.

Gyoza are dumplings filled with ground meat and vegetables and wrapped in a thin dough.

Also known as pot stickers, gyoza originated in China (where they are called jiaozi).

They have become a very popular dish in Japan.

Nori is a dried edible seaweed used in Japanese cuisine.

Nori sheets are eaten as a snack — with its briny flavor and crunchy texture — it’s best to buy the plain sheets and toast them yourself for maximum flavor.

It has a strong and distinctive flavor, and is often also used to wrap rolls of sushi or onigiri (rice balls).

It was served in the late 1860s (Meiji period) to royals.

Senbei is a traditional Japanese treat that is best described as baked rice cake cookies or crackers.

As opposed to typical American cookies, senbei is intended to be a savory snack that is available in flavors like soy sauce and ebi (shrimp), red pepper or sesame.

Many ramen establishments have been teaming up with convenience stores such as 7-Eleven to sell instant versions of their top-selling noodles.

There are plenty of different flavors to try!

Okashi is the Japanese word for confectionery (sweet) snacks.

Dagashi and wagashi are types of okashi.

The word dagashi is derived from the Japanese words da (“futile” or “negligible”) and kashi (snacks).

Dagashi used to be sold in stores specializing primarily in dagashi called dagashiya but are now sold in convenience stores (konbini) as well.

Wagashi are traditional Japanese confections that are often served with green tea, especially the types made of mochi, anko, and fruit.

Wagashi are typically made from plant-based ingredients.

The term wagashi is derived from the words wa (Japanese) and Kashi (snacks).

What is a confection?

A confection is a food made with sugar and carbs. Bakers’ confections include sweet pastries, cakes, baked goods, and breads.

Hot oden is real “soul food” for the Japanese in the winter months.

A sweet bread covered in a thin layer of crisp biscuit/cookie crust with grid line pattern on top. The Japanese word for bread is “pan”.

Some say that the original melon pan resembled an oriental melon with the parallel lines on the crust, and was filled with sweet white bean paste (shiro-an) inside.

Other very popular Japanese sweets include:

Available at konbinis (Japanese convenience stores), some say that it’s the best egg sandwich they ever tasted!

Any sandwich expert would agree that they are more than just a grab-and-go food, but an art form itself.

We think it owes a lot to the Japanese sensibility and creativity for food.

Yakitori are grilled chicken skewers made from bite sized pieces of meat.

Its made from all different parts of the chicken, such as the breasts, thighs, skin, liver and other innards.

Usually made to order and cooked over charcoal, yakitori is a popular, inexpensive dish commonly enjoyed together with a glass of beer.

Wagyu beef from Japan is the most prized beef in the world.

Wagyu is any of the four Japanese breeds of beef cattle. Some examples are Kobe, Matsusaka, Kobe, Yonezawa, Mishima, Ōmi and Sanda.

If you’re eating “Kobe beef” outside of Japan, there’s a good chance it’s fake. In the U.S. Kobe is mostly served in high-end restaurants.

A bento is a single-portion take-out or home-packed meal. A traditional bento may contain rice or noodles with fish or meat, often with pickled and cooked vegetables in a box.

Many Japanese restaurants in the United States have bento boxes on their menus.

The dish first appeared in food stalls in Japan during the post World War II period.

Tamagoyaki is a type of Japanese omellette, which is made by rolling together several layers of fried egg.

Salt, dashi (broth), and a bit of sugar is added, giving it a slightly sweet taste.

Tamagoyaki can be eaten hot, at room temperature, or chilled.

Tempura refers to a variety of foods that have been lightly battered and fried, with the most common tempura dishes featuring seafood and vegetables.

The vast majority of jidohanbaiki serve hot and cold beverages.

Some serve hot meals and other foods such as: instant noodles, fresh produce, sushi, ice cream, and more.

While sake may be the most well known fermented beverage from Japan, beer is the most popular drink for the Japanese.

Japanese beer is a fermented alcoholic drink made from grain, yeast, and water.

Dutch traders introduced beer to Japan in the 17th century, also known as the Edo period.

A Japanese hot-pot stew or one-pot dish (nabemono) that is eaten in large amounts by sumo wrestlers as part of a weight-gain diet.

The dish consists of chicken broth or dashi soup base with mirin or sake for flavor.

Note: Some sushi chains in Japan have halted conveyor belts due to COVID, and clients now order using touch panels.

Kaiten-zushi is a sushi restaurant where plates with sushi are placed on a rotating conveyor belt or moat that winds through the restaurant tables and seats.

The final bill is based on the number and type of plates of the consumed sushi.

Is it rude to eat with a fork in Japan?

The biggest part of Japanese dining etiquette involves the use of chopsticks. Don’t use the chopsticks like a sword and “spear” your food. The Japanese consider this behavior rude. If the food is too difficult to pick up, use a fork instead.

What is the most commonly eaten meat in Japan?

The most popular type of meat by far in Japan is pork. Nearly as much pork is consumed as chicken and beef combined.

Miso soup is full of healthy probiotics, which can reduce the risk of inflammatory bowel disease and other problems with the digestive system.

If you found this post on Traditional Japanese Foods helpful, please share it with your friends and followers!

100+ Traditional Ecuadorian Foods from A to Z...