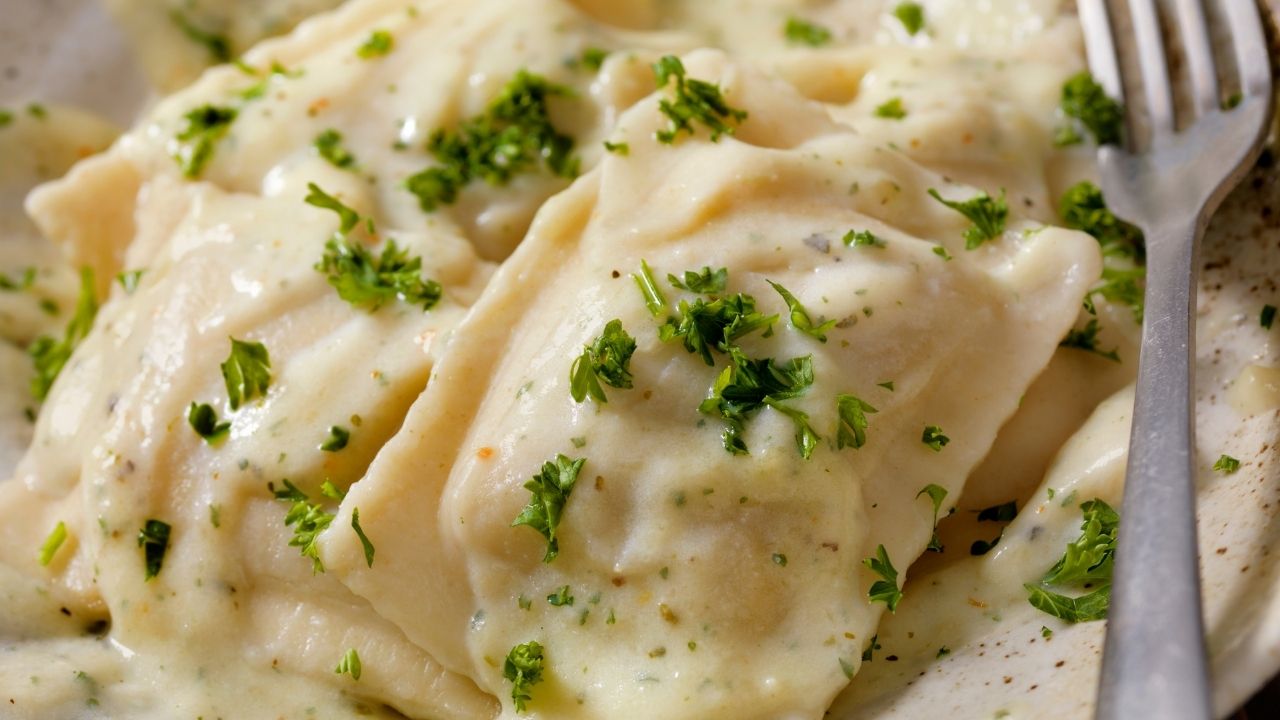 This is how to fix salty Alfredo sauce!

Here are 5 quick & easy fixes to reduce the sodium levels in your Alfredo sauce.

Good low-salt cheese options include: fresh mozzarella, Swiss, goat, and ricotta, or Gruyere. Stir cheese(s) into the Alfredo Sauce over low heat until the cheese is smooth.

Tip: When using cream, reduce the cream to sauce consistency and then add it to the salty sauce.

The saltiness will be lessened without making the sauce too thin.

Start with a splash. Taste, and add more until just right.

Don’t reduce (aka evaporate) the extra liquid in your Alfredo sauce to thicken it.

Reduction can concentrate salty flavor. Instead thicken it with a slurry, roux, or beurre manie.

Tip: If you choose to add wine, simmer the sauce until the alcohol burns off. If the alcohol does not cook out entirely, then the sauce will become bitter.

If adding a liquid to lessen the salt flavor, you might need to thicken the Alfredo sauce back to the desired thickeness.

Try a starch slurry, beurre manie, or a roux.

Each of these thickening techniques will further reduce the salt levels in your sauce:

Flour and cornstarch are commonly used for thickening, but you can also use potato starch, arrowroot flour.

Beurre manié is French for kneaded butter, because you knead the butter and flour together.

You can use a food processor for larger quantities of beurre manié.

A roux is also French and describes the paste created equal parts fat with flour.

A french béchamel sauce made from a white roux and milk can also be added to the salty sauce.

Add half the amount of Alfredo sauce you used (without adding salt).

If the Alfredo sauce is very salty, double the original amount.

Do not to use a broth/stock with high sodium levels, or a salty cheese — like Parmesan — in your second batch of sauce.

If you have a large batch of Alfredo sauce, add more (unsalted) pasta.

This will further mitigate the salty flavor.

Vegetables will neutralize the saltiness.

This is also a great hack for adding more nutritious vegetables to your meals.

You can even make a puree of white rice and water to avoid thinning out the sauce too much.

Be careful with this one so you don’t end up with scrambled eggs in your sauce!

Be sure to follow the above instructions to properly temper your eggs.

7. Make Another Dish Out of It

Here are some ideas for how to turn salty Alfredo sauce into a masterpiece:

A dry or sweet white wine, or a semi-dry Riesling will distract your palate and balance the salty flavor of your sauce.

When you need some comfort food fast, there’s nothing better than Fettuccine Alfredo!

This is a great base recipe for all your one-pot pasta needs.

Fettuccine Alfredo is one of the easiest and tastiest pasta recipes EVER!

Fettuccine Alfredo is named after Alfredo di Lelio, who featured the dish at his restaurant in Rome in the early- to mid-20th century; the “ceremony” of preparing it table side was an integral part of the dish. – Wikipedia

How do I avoid oversalting Alfredo sauce?

When cooking, keep in mind that under salting is easier to fix than over salting.

Which cheeses have the most salt?

Salt is ionic and the level of salt can only be reduced, by dilution (adding non-salty liquid). Or running it through a desalinization facility that uses reverse osmosis or some other industrial process.

What is the best pasta to use for Alfredo sauce?

What is difference between fettuccine and linguine?

Fettuccine is sometimes confused for linguine. But fettuccine is wider, thicker and flatter than linguine. It’s an ideal pasta for a heavy, creamy sauce, like Alfredo sauce. Fettuccine is traditionally made of egg and flour (usually one egg for every 100 g of flour).

How do you pronounce fettuccine?

What goes well with fettuccine alfredo?

Fettuccine Alfredo is great with:

“The limit does not exist!”

How do I fix Alfredo sauce with too much milk?

Reheat the Alfredo sauce on the stove stirring constantly. Heat the milk down to the desired level. Optionally, you can add a starch like flour, cornstarch, or mashed potato flakes to thicken it. Starches should be cooked to remove the raw flavor.

How do you fix salty cream sauce?

For cream or butter based sauces, just add more cream. Adding sweetness like sugar can also mitigate the salty flavor.

How do you make Alfredo sauce sauce thinner?

Throw the Alfredo sauce in a skillet with olive oil, stock/broth, wine, water, or cream and cook over a low heat.

How long does it take for Alfredo sauce to thicken?

Bring the sauce to boiling, then reduce the heat and simmer, uncovered, 3 to 5 minutes. Cook the sauce until it begins to thicken, stirring constantly.

Will Alfredo sauce thicken as it cools?

Yes. But, Alfredo sauce is best served hot, so keep the dish on low until ready to serve, remember to stir it occasionally.

Can I freeze Alfredo sauce?

Absolutely! Like other cheesy pasta casseroles, Alfredo sauce freezes well. You can freeze it in separate containers, too, for easy reheating.

How do I reheat my Alfredo sauce leftovers?

Reheat your pasta in a pan over low heat, stirring occasionally. Microwaving may make your noodles a too-soft, and might leave your sauce greasy instead of creamy.

If you found this post on how to fix salty Alfredo sauce helpful, please share it with your friends and followers!