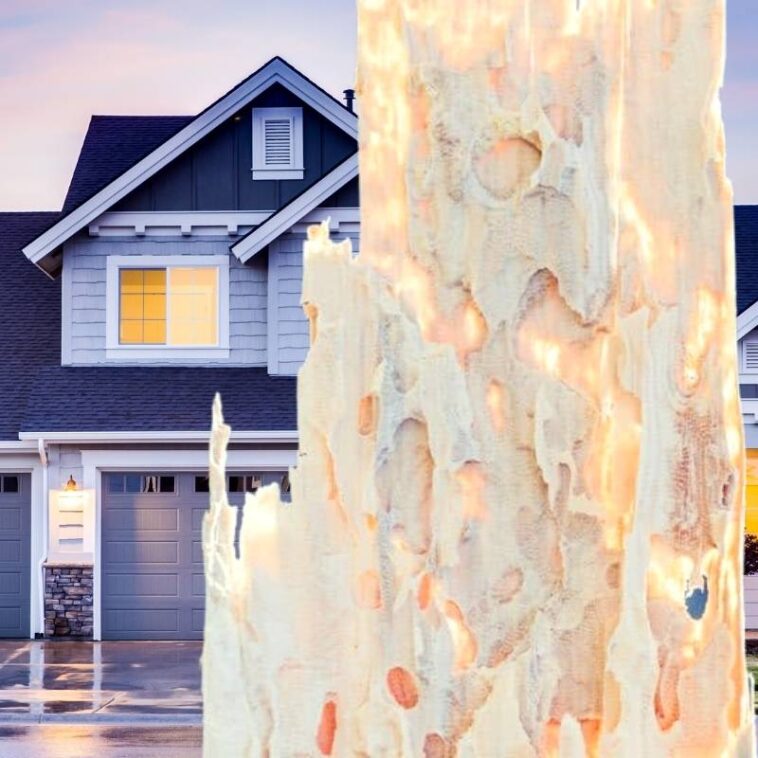 In this article, we’ll discuss when your standard homeowners insurance does and doesn’t cover powderpost beetle damage.

Even if your policy does cover insect damage, there may be certain limits or exclusions. Check your policy to understand exactly what may be covered.

Is the seller responsible for undisclosed powderpost beetle infestation?

In some states, a home seller can be held responsible for not disclosing a pre-existing pest infestation issue with the home.

There are certain regulations when it comes to selling a property. One such regulation is that the seller has to be upfront about any problems that exist.

You may be able to recover money from the seller for pest damage, such as powderpost beetles.

Can the exterminator be held responsible for powderpost beetle damage?

In certain instances, your exterminator may be held legally responsible for the damage caused by powder beetles.

Exterminators carry business insurance policies and you may receive compensation under the exterminator’s general liability coverage.

Yes, some states require new homes to be built with a certain level of protection against wood destroying insects.

According to the National Association of Insurance Commissioners (NAIC), most standard homeowners insurance policies don’t cover insect damage or removal. Pest infestations are preventable with routine home maintenance and is the homeowner’s responsibility.

There are insurance policies available, but they’re the exception rather than the rule. Search for “wood-destroying insect damage” and you may find that it’s what’s covered. These types of policies typically cover termites, carpenter ants, bees and other pests too.

Most insurance companies do not offer additional coverage for insect damage, although some pest control firms offer annual inspection and treatment programs.

What should I do if my insurance company denies my claim?

Homeowner insurance companies do not always pay valid insurance claims. Consulting a lawyer may help you determine if your claim is covered or not.

An attorney may substantially increase the value of your claim. They can also help you navigate the claims process and negotiations.

How to prevent powderpost beetle damage

There are a few things you can do to help prevent powderpost beetle damage:

How to identify powderpost beetles in your home

Powderpost beetles live under the surface of wood, so you may not see them outwardly. However, it is helpful to know that they’re narrow, dark brown, and about ¾” long.

If you think you may have powderpost beetle damage in your home, there are a few things you can do to check.

Look for small, round holes in wood surfaces – these holes are where the beetles have bored into the wood to lay their eggs. You might also see piles of fine sawdust around these holes. The appearance of wood powder, followed by small, circular “shot holes” in the wood’s surface, is the classic indicator of an infestation. Newly emerged adults mate and lay eggs on or beneath the surface of unfinished wood.

The eggs hatch into larvae that bore into the wood and emerge one to five years later, typically in late winter, spring, or summer, depending on the species. Because the adults are active primarily at night, homeowners are more likely to notice damage rather than the beetles themselves. Some of the beetles are drawn to light, so you might find them near broken wood or on window sills.

Powderpost beetle tunneling and larval development occur beneath the surface of the wood.

Some powderpost beetles inhabit moist environments, such as crawl spaces. Anobiid infestations are prevalent throughout the majority of the United States but are especially prevalent in the southeastern and coastal states, where humidity and temperatures are high and crawl space building is prevalent. In contrast to lyctids and bostrichids, anobiid powderpost beetles can digest the cellulose in wood and are less reliant on starch and other nutrients that diminish with time. This permits them to infest wood of any age.

If you suspect damage, consider contacting a professional pest control company to come and inspect your home.

How to prevent powderpost beetles in your home

Powderpost beetles lay their eggs only on bare, unpainted wood. Generally, surfaces that have been stained, varnished, painted, or otherwise protected are resistant to subsequent infestation. Beetles coming through such coatings were normally in the wood before the finish was applied. Even though beetles that come out of finished wood could re-infest by laying eggs in emergence holes, this is less likely if the holes are closed.

Replacing small pieces of damaged wood can be an effective control technique. Before wood is utilized for construction or industry, the majority of the moisture is extracted by air-drying or kiln-drying. Kiln-dried lumber is heated between 125 and 140 degrees Fahrenheit for several hours.

However, even wood that is adequately kiln dried may become contaminated during later storage and travel. The longer wood stays in a weak condition, the more likely it is that beetles will find it and lay eggs in it.

Anobiid powderpost beetles, in particular, have significant moisture requirements for survival. Wood with a moisture content of less than 14% is generally unsuitable for development in the spring and summer. Therefore, it is advisable to create a moisture barrier in damp crawl spaces that are infested. Covering the soil with polyethylene sheeting reduces moisture migration into the foundation and the risk of an infestation migrating upward into structures.

Other strategies to reduce wood moisture content in crawl areas include adding foundation vents to boost air circulation and improve drainage. Moisture meters, utilized by pest control organizations, are convenient equipment for evaluating the moisture content of wood and forecasting the risk of infestation

How to treat powderpost beetle damage

If you have powderpost beetle damage in your home, it’s important to treat it immediately or consult a professional. Powderpost beetles can cause a lot of damage to wood structures, and if left untreated, the damage can be extensive.

There are a few different ways to treat powderpost beetle damage, and the best way will depend on the severity of the infestation.

If you have a small infestation, you may be able to treat it yourself with insecticides. If the infestation is more severe, you may need to call in a professional.

Various insecticides are used to treat beetle-infested wood. Insecticides known as borates are most often employed for this purpose. Borate sprays are capable of penetrating and killing beetles within wood as well as those entering and exiting the wood’s surface.

The depth of penetration will depend on the wood’s moisture level; the wetter the wood, the deeper the borates will penetrate. Two separate formulas are employed: Bora-Care and Tim-bor. Both products are virtually harmless and odorless.

Fumigation is a costly option for clearing a building of powderpost beetles. Homes undergoing fumigation are sealed with tarps, and inhabitants must remain outside for around three days. Structural fumigation may be necessary when infestations (usually of anobiids) have grown into walls, between floors, and other regions where access for surface treatment or wood removal is impossible.

While it would be impossible to eradicate wood-boring beetles from ‘built-in’ components such as floors and cabinets, it may be possible to decontaminate furniture and similar products using a heat chamber.

Pest control organizations utilize stationary and portable heat chambers of various sizes. Temperatures used for powderpost beetles would be comparable to those used for bed bugs (120–135°F), although exposure lengths may need to be extended, such as up to 24 hours, depending on wood thickness.

Powderpost beetles can also be eliminated by immersing smaller wood items in a deep freeze (zero degrees Fahrenheit) for three to seven days, depending on the wood’s thickness.

Either way, it’s important to get rid of the powderpost beetles as soon as possible to prevent further damage to your home.

What is the powderpost beetle?

The powderpost beetle is a type of wood-boring insect that can cause extensive damage to homes and other structures. These insects are particularly attracted to softwoods, such as pine, fir, and cedar, and can quickly bore through these materials to create tunnels and nests. Powderpost beetles can also infest hardwoods, such as oak and maple, but they typically cause less damage to these materials.

What are the best homeowners insurance companies?

The best homeowners insurance companies provide a higher standard of customer service and insurance products. The carriers below are worth switching to if your current insurance provider has limited powderpost beetle coverage.

Should I inspect for powder post beetles before buying a home?

Before buying a home, you should have it inspected for powder post beetles and other insect or vermin infestations. If there is an infestation, you can renegotiate the price or have the seller remedy the issue before closing.

Are there any other powder post beetle coverage plans?

A pest control bond provides a financial protection if a pest control business fails to follow state and federal laws, and causes damage to your property or person.

Pro Tip: Read the details of the bond agreement since some may not cover certain species of insect. Understand the agreement details before you sign on the line.

Powder post beetles can do a lot of damage to your home. Since standard homeowners insurance policies rarely covers powderpost beetle damage, it is best to prevent them. Make sure wood and wood furniture in your home is painted, varnished, waxed, and either air-dried or kiln-dried. Low moisture levels will prevent powderpost Beetles.