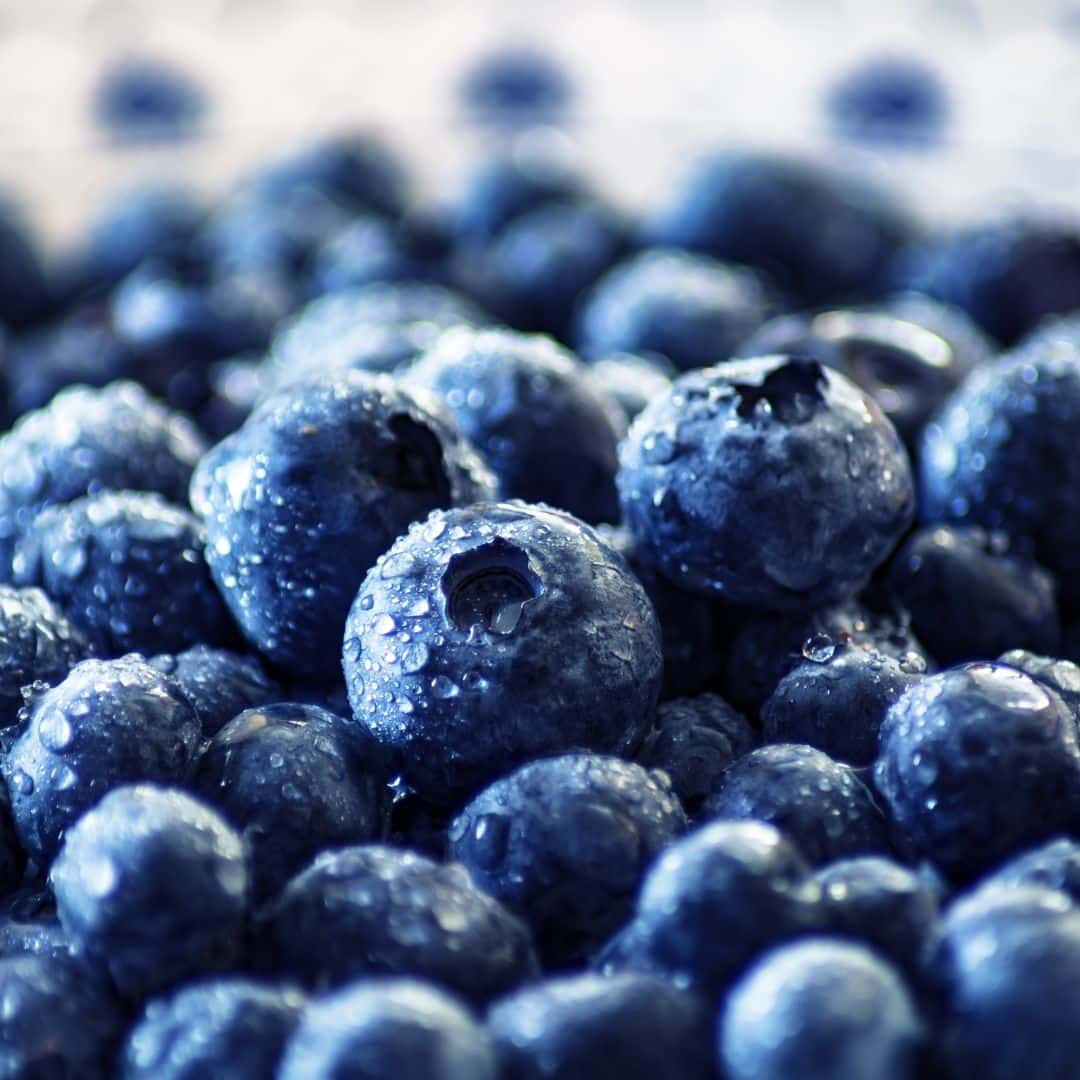 I went on an exhaustive journey to find blue foods. This list includes naturally blue foods like fruits and vegetables. And also blue snacks and party foods for your next blue themes party.

A fruity classic: Blueberries are a great source of fiber and are jam-packed with Vitamin C! They’re considered a superfood.

The flavor of blue velvet cake is the same as a red velvet cake—fluffy vanilla cake with a hint of chocolate slathered in tangy cream cheese frosting.

Originally developed by the Hopi, blue corn is a staple of Mexican and American Southwest cuisine and is a totally natural blue food. It’s used to make blue tortillas and corn chips, and as a bonus, it has 20 percent more protein than white corn!

Blue cheese or bleu cheese is cheese made with cultures of the mold Penicillium, giving it spots or veins of the mold throughout the cheese, which can vary in color through various shades of blue and green.

To make this blue bread, loose butterfly pea flowers are added to the dough.

A Dutch heirloom grown in the area of Utrecht, Netherlands in the early 1900s with superior blue color and long black awns (bristles).

The striking blue lobster is just a variation of a regular American lobster.

Blue tomatoes, also known as purple or Indigo Rose tomatoes, are grown to be high in anthocyanins.

Pansies are edible flowers that have a mild, fresh flavor or a more prominent wintergreen taste depending on the variety and how much you eat.

Jolly Rancher is an American brand of sweet hard candy, mostly defined by its assortment of bold fruit flavors

The blue crab is a one in a billion chance. It’s a very rare genetic mutation. A blue crab has white meat which has a mild, salty ocean flavor with a subtle sweet undertone. The backfin meat is delicate, flaky, and tender.

Del Pacifico Mexican Blue Shrimp are sweet and succulent with a crisp, snappy texture — the way wild-caught shrimp are supposed to taste.

This blue-purple fruit may help defend against the cold and flu by boosting your immune system. It’s also been shown to help people recover from these illnesses faster

Damsons are blue plums that are often processed into jams and jellies. They can also be dried to make prunes.

Concord grapes are a healthy, purple-blue fruit that can be eaten fresh or used to make wine, juices, and jams.

Blue foods are rare because anthocyanidin content is a rare chemical feature in the plant world. Discover more blue food facts in the Frequently Asked Questions section below.

During summer, iridescent blue fruit and reddish-orange fallen leaves can be found beneath trees. In Hawai’i the seeds are used for leis.

How to make them? Simply use regular cookie dough and add a few drops of blue food dye.

Borage seed oil is extracted from its seeds and used in herbal medicine. This herb is native to Europe and grown in gardens for its edible leaves.

Just like the American blue lobster, the lingcod can sometimes be blue (although it’s very rare). The Lingcod’s flesh is bright turquoise- but only stays blue before it’s cooked.

Peeps are marshmallows candies typically eaten as an Easter tradition in the United States and Canada. They are shaped into chicks, bunnies, and other animals.

The ‘Adirondack Blue’ is a potato variety with blue flesh and skin with a slight purple tint. It’s great for boiling, baking, mashing.

An edible mushroom, the indigo milk cap is native to North America and East Asia, and is sold in rural markets in China, Guatemala, and Mexico. Once you cook them, however, they turn from blue to grayish in color!

Tuscan Blue Rosemary is a good choice for the edible herb garden in small amount. It is also well-suited for use in cooking.

Blue moon is an ice cream flavor with bright blue coloring, available in the Upper Midwest of the United States and originating in Milwaukee, Wisconsin.

Persian True Blue Rock Sea Salt is one of the rarest and oldest salts on the planet, it is extracted from salt ponds in Semnan, Iran (formerly known as Persia) that formed over 100 million years ago. The blue color comes from a mineral call sylvinite.

Dyed with squid ink, this blue pasta has a rich, briny flavor, close to the flavor of fresh sea fish with some umami hints.

Also known as ‘Sapphires of the Ocean’, the Blue Caviar is the roe of Wild Scampi harvested in the waters of Australia.

Boasting a distinctive blue hue and an extra sweet punch, this Blue Martini recipe is almost too

Why Are So Few Foods Blue?

Blue anthocyanins are chemically less stable than other pigments and are usually dominated by them. In order for the blue hue to predominate in the mix, it must have a slight shift in its chemical makeup. This is a rare occurrence. In the case of concord grapes, the mixture of anthocyanin pigments and the chemistry favors the blue hue. In other words, the blue pigment is there, the chemistry is right and you get a predominantly blue hue.

Blueberries aren’t actually blue, but deep purple, which is the colour of anthocyanin, a pigment that is especially rich in blueberries. … For example, our ancestors would have known to eat berries that had a rich colour, because that meant they were sweet and ripe.

Blue and purple foods are perhaps the most potent antioxidant-laden food group. Their blue pigment comes from anthocyanins, an antioxidant that contains naturally occurring polyphenols.

If you found this post on 30+ blue foods super helpful, please share it with your friends and followers!