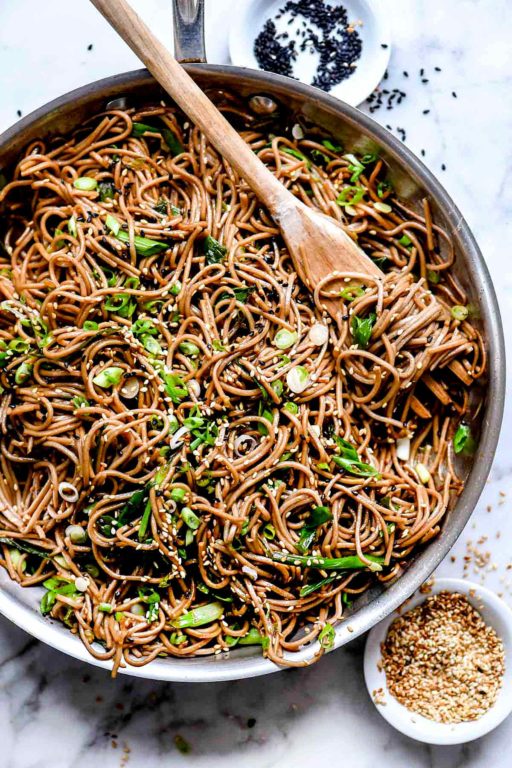 Here are delicious soba noodles that you need to try!

New to soba? Here’s the gist: The Japanese noodle is made of buckwheat, and tastes delish.

It’s important to choose soba noodles carefully, because different brands have different qualities, from the texture of the noodles to the flavor to even how long they keep in your pantry.

There are some brands that do it better than others, which is why we’ve decided to compile this list of the best soba noodles you can enjoy at home!

Soba noodle meals come together in less than 10 minutes — and basically transport you to Tokyo.

There are different varieties of soba noodles in Japan, but the primary differences are the ratio of buckwheat flour.

These high-quality, Japanese noodles are made from buckwheat and wheat flour, and they go really well with any number of different sauces, depending on where you get them and what the chef has in mind for them.

It’s hard to say which type of soba is tastier. Try them all!

When it comes to noodles, the Japanese just do it better.

MUSO From Japan buckwheat soba noodles are gluten-free and made with organic buckwheat flour only, no salt added. They are specially crafted in Japan with the finest traditional skills to produce one of the best authentic juwari (100% buckwheat) soba noodles.

The most authentic juwari soba — are noodles made with only buckwheat flour and water, the former being the only ingredient listed on the label. Eden’s organic buckwheat soba has an earthy and nutty taste. The texture is grainier than other soba on the market, due to the absence of wheat gluten and other binders.

One reason why wheat flour is often added to soba noodles is that buckwheat by itself may result in fragile noodles.

This premium brand of soba noodles uses only water and buckwheat flour, with no additives, so you can enjoy the delicious nutty and earthy flavor of soba.

Eat these soba noodles right away, before they get mushy, so you enjoy the flavor and texture.

Over 300 years ago, when soba noodles were made with just buckwheat flour, they were prone to easily breaking apart. The gluten in wheat flour makes it easier for the noodle dough to hold together.

These organic soba noodles come together in no time, add sesame seeds for extra crunch.

You can jazz it up with anything from frozen gyoza to bok choy or snap peas.

Or add whatever vegetables you have on hand for cold soba noodles.

Toss them in a homemade dressing made with lime juice, soy sauce, sesame oil, and maple syrup for a refreshing meal on a warm summer day.

These Amazon best-selling soba noodles are made from premium buckwheat flour grown in Japan. You can’t go wrong with this staple soba noodle. They cook quickly, for chewier noodles cook a minute or two less. You get good quality and quantity for a good price with these noodles.

A great choice for anyone looking for organic and kosher soba noodles. These noodles have a terrific taste and texture, and are delicious served in a Japanese style vegetable soup flavored with soy sauce and miso. Alternatively serve with lightly stir fried vegetables and strips of meat or tofu for a more substantial meal.

Certified organic buckwheat noodles are one of the most nourishing fast foods on earth. These soba noodles are high in protein, fiber and minerals like magnesium.

Instant soba noodles are the most accessible food since they are easy to make, fast, tasty, and cheap.

In Japan, you can find different classes of instant soba noodles in konbini (convenience stores) and supermarkets.

Many brands are also available online.

This is the most beloved instant soba noodle in Japan. The delicate broth, crispy tempura, and chewy noodles are the real winners here. The konbu (seaweed) flavor is popular in Japan, partly due to the bonito stock with sansho pepper. Top with some bacon or and egg for extra protein.

Nothing beats a classic! There’s plenty of variety when it comes Nissin’s instant noodles.

This donbei kamo dashi soba seasoned with duck fat is way better than eating out. It has a green onion kick that you won’t be able to resist. If you’ve ever wanted to try kamo dashi soba in Tokyo, this is the next best thing!

Use whatever you have!

These instant soba noodles feature bits of seasoned chicken and green onions as main toppings. “Tori (鶏)” means chicken in Japanese and “Nanban (南ばん) refers to green onions. The soba noodles have an amazing flavor, and are really good, naturally, you’ll be going back to this one on a regular basis.

Maruchan is one of the most well known Japanese instant noodles.

Midori No Tanuki is buckwheat noodles in a hot broth topped with a large piece of deep-fried shrimp Tempura.

The broth is soy sauce-based, umami-packed, and slurp-ready! You can jazz it up with anything from shredded nori to sesame seeds.

Explore authentic and simple soba noodles. Made from just 4 ingredients: wheat flour, buckwheat flour, water, and salt. NON-GMO project verified, no artificial colors, flavors or preservatives, and vegetarian. They are ready in 4 minutes and they pair well with any broth

One thing is for sure, you will surely enjoy eating this instant soba noodle whether it is for an afternoon snack or light dinner. This one’s not too pricey and absolutely delightful.

These hearty soba noodles are made with a blend of organic buckwheat and sifted organic wheat to provide a smooth, velvety texture and quick cooking experience. They are produced by the traditional roll and cut method, not extruded like other modern pastas. The noodles are rolled in six-foot long sheets and then cut and left to dry. Use these traditional soba noodles in place of ramen, udon, cho mein, or fettucine. INGREDIENTS: Organic buckwheat, organic sifted wheat flower, sea salt.

This is a must eat instant soba noodle. These authentic, smooth noodles are delicious either hot or cold. They’re chewy and delicious because they’re made with mochi barley.

Lotus Foods is excited to bring Asia’s most popular noodles to American kitchens, now all gluten-free, and made with organic and whole grain rice. We combine organic buckwheat seed that gives such valued taste and nutrition— with organic whole grain brown rice to create a beloved yet gluten-free Japanese-style soba noodle. With its rich and nutty taste, Serve chilled with a dipping sauce, in a hot broth, or in any pasta or stir-fry.

You’ll be blown away with how good these instant Okinawa soba noodles are. They’re hard to find in U.S. supermarkets, however they are available online through Pacific Mercantile Company. Kick it up a notch by topping with sesame seeds, scallions, sprouts, or your favorite soba noodle garnishes.

If you’re tired of your usual instant soba routine, mix things up with. Maruchan’s yakisoba fire noodles clock in at 8706 Scoville units, which makes them one of the spiciest instant noodles on the market.

Need more spicy noodles? Prepare to fall in love with the 7 Spiciest Instant Noodles Ever.

What are soba noodles?

Soba is a thin Japanese noodle made from buckwheat. The noodles are served either chilled with a dipping sauce, or hot in a noodle soup. In Japan, soba noodles can be found in “fast food” places to expensive specialty restaurants.

Japanese soba noodle have a distinctively nutty and earthy flavor. They’re hearty and slightly chewy. In the summertime, soba noodles are refreshing when served chilled with a dipping sauce or cold broth.

Despite the name, buckwheat is not wheat. It’s technically a seed that’s harvested from a flowering plant related to rhubarb. Buckwheat is gluten-free and rich in fiber and several minerals.

When were soba noodles invented

Soba noodles are part of Japan’s washoku (traditional) cuisine and have been eaten in their current incarnation (as noodles) since the Edo era from 1603 to 1868.

What are the benefits of eating buckwheat?

Buckwheat is a highly nutritious whole grain that many people consider to be a superfood. Among its health benefits, buckwheat may improve heart health, promote weight loss, and help manage diabetes. Buckwheat is a good source of protein, fiber, and energy.

Despite its name, buckwheat is not a type of wheat — in fact it’s not technically a grain at all! Buckwheat is one of the six pseudo grains that are not part of the Poaceae cereal family but are considered grains due to their similar uses from a culinary and nutritional perspective.

What are some authentic soba noodle flavors?

You might have seen packages of green or pink soba noodles in Japanese grocery stores.

What is zaru soba?

Zaru Soba is a chilled soba noodle served with soy sauce-based dipping sauce called Tsuyu (つゆ). The word zaru means “a strainer” in Japanese and the name of the dish was derived from the way the noodles are served over a bamboo strainer during the Edo Period.

Yakisoba noodles are the same noodles used in ramen, a popular Japanese noodle soup. In some areas of Japan (mainly the Fukuoka Prefecture), yakisoba features thick, chewy udon noodles instead of wheat noodles (in a dish called yaki udon).

Buckwheat is a naturally gluten-free food that is related to the rhubarb plant. It’s a versatile grain that can be steamed and eaten in place of rice, or the whole seeds can be ground into a fine flour.

When were instant noodles invented?

Instant noodles rose to fame about 60 years ago in Japan after the 2nd World War to feed the starving Japanese population. Instant noodles were launched by Momofuku Ando under the label name ‘Chickin Ramen.’ Over the years, instant noodles became a worldwide favorite comfort meal.

What are the types of Japanese noodles?

Is soba healthier than pasta?

What are chuka soba noodles?

In Japanese, “chuka” is the word for Chinese. Chuka soba noodles are the Japanese version of Chinese egg noodles. These slightly yellow-color curly noodles are made simply with wheat flour, water, salt and yellow food coloring. These are the noodles commonly used in Yakisoba noodles.

Why are Japanese instant soba noodles so popular?

Japanese instant noodles are very popular generally because it’s easy to eat and can be eaten anywhere. Just add hot water or microwave. All the seasoning coms in packets in the cup/box. Japanese instant ramen are also popular due to the number of options to choose from.