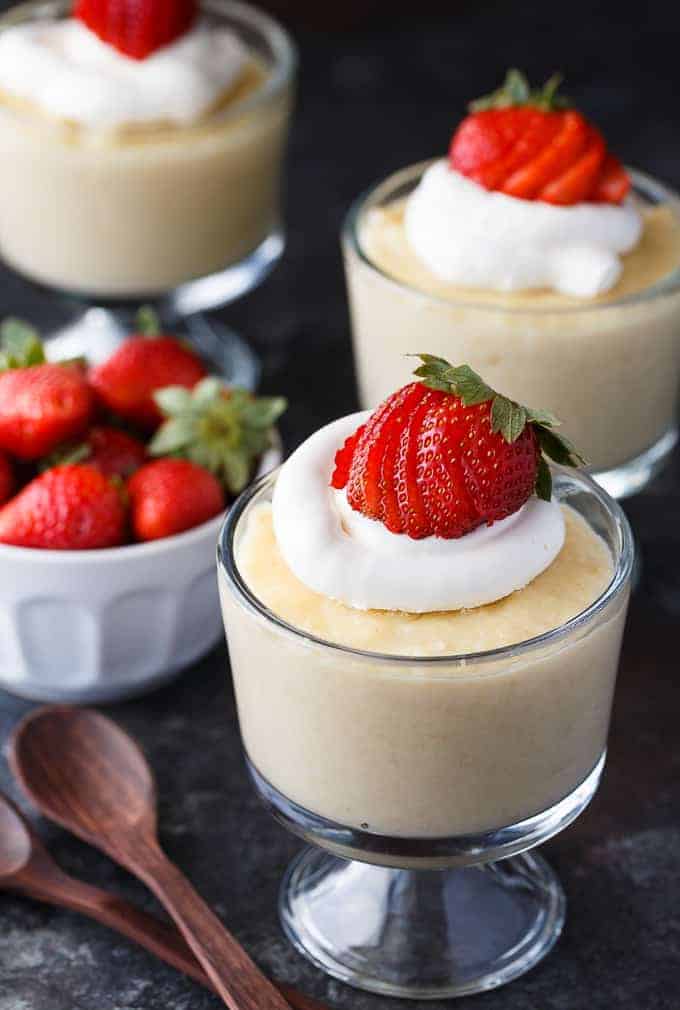 American puddings are a top-tier, yet underrated desserts.

Here is a list of over 20 delicious American puddings you must try!

There is no meal that cannot be improved by pudding.

Pudding was brought to colonial America by the English.

American pudding is a sweet dessert similar in consistency to a custard or mousse.

English pudding can be savory or sweet. A savory version includes Yorkshire pudding.

A pudding containing apples whose cores have been replaced by sugar.

The apples are nestled in a bowl created by the crust.

RELATED: 60+ Desserts That Start With B

A sweet dessert originating from the Southern United States.

It typically consists of layered vanilla custard, sliced bananas, and wafers or ladyfingers. And then topped with either meringue or whipped cream.

This dessert became closely associated with the American South after WWII, when numerous banana pudding recipes started to get published in newspapers.

Puerto Rico is a U.S. territory.

This classic American dessert is prepared with caramelized brown sugar that is blended with a creamy mixture of butter, milk, and eggs.

Although not much is known about the origin, the term butterscotch was originally used to refer to the famous English confectionery created in 1817.

A pudding from Guam (a U.S. territory). Latiya, pronounced ‘la-tee-ja’, this is a classic Chamorro dessert.

A light, creamy, custard-like pudding that originated in Spain from natillas, a traditional Spanish dessert custard.

Hasty pudding is a pudding or porridge of grains cooked in milk or water.

In the United States, it often refers specifically to a version made primarily with ground (“Indian”) corn, and it is mentioned in the lyrics of “Yankee Doodle”, a traditional American song of the eighteenth century.

Haupia is a Hawaiian coconut pudding made entirely from coconut milk and thickened with cornstarch.

A no-cook pudding made by Jell-O. It contains sugar, flavoring agents and thickeners as primary ingredients. My favorite flavor is pistachio.

A traditional, New England, sweetened stove-top Thanksgiving dessert that was brought over from the 17-century English colonists in the original form known as hasty pudding.

Traditional Indian pudding is a combination of cornmeal, water, molasses, butter, and eggs, along with available spices, fruits, and nuts.

This New Orleans dessert is a classic for Christmas, Mardi Gras, or any special meal.

Bread pudding is offered at many restaurants in the French Quarter and nearby, both the fine-dining and casual establishments.

This 15-minute pudding is inspired by a recipe from Alice Medrich, the American cookbook author.

Oat milk creates a pudding with the plushest texture.

Warm and cozy and perfect for fall.

Ozark pudding is a dry fruit custard with nuts.

It originated in Missouri, being named after The Ozarks region.

Persimmon pudding is a traditional American dessert made with persimmons.

It is similar to traditional English dessert. And evolved from a Native American bread made from a type of persimmon fruit.

Pistachio pudding is smooth and creamy, intensely nutty — and green.

The Jell-O brand, which introduced a line of pistachio pudding mix in 1976.

In New Mexico and southern Colorado, Panoch is a pudding made from ground sprouted wheat and piloncillo.

It is traditionally eaten during Lent.

Pumpkins originated in the southern United States and northeastern Mexico.

Like rice pudding. Nutritious superfood quinoa is the star of this creamy, coconut milk-based Quinoa Pudding, that tastes like a cross between rice pudding and tapioca.

According to the Minute Tapioca Company, it originated in Boston in 1894. In the home of housewife Susan Stavers was a sick sailor. Among his belongings were cassava roots carried home from a sea journey.

Tembleque is a coconut dessert pudding from Puerto Rico. It is one of the most popular desserts in Puerto Rican cuisine.

Tembleque means wiggly, referring to the jiggle when shaken.

This pudding is popular at Thanksgiving and Easter.

What are American puddings thickened by?

American pudding is usually thickened with gelatin or a starch, whereas custard is thickened by the eggs.

How many types of puddings are there?

There are 4 major types of puddings: boiled, baked, steamed and chilled in the refrigerator until it sets.

Is pudding served hot or cold?

Creamy puddings are typically served chilled, but a few, such as rice pudding can be served warm.

What is the difference between pudding and custard?

While most custard and pudding recipes both typically call for eggs, the main difference is that pudding uses a starch for thickening, whereas custard’s thickening agent is the egg. Custard’s texture also tends to be firmer than pudding.

What do the British call American pudding?

American puddings are closer to what the Brits would call “custard.”

What is a traditional British pudding?

Sticky toffee pudding is Great Britain’s most popular pudding. It is a date cake with caramel sauce that’s traditionally steamed but is now often baked.

What is the difference between tapioca and rice pudding?

What are the little balls in tapioca pudding?

The little white pearls that gives tapioca pudding its signature texture come from the starch of the cassava root. After the starch is extracted, it’s formed into little white balls.

If you found this listicle on American Puddings helpful, please share it with your friends and followers!